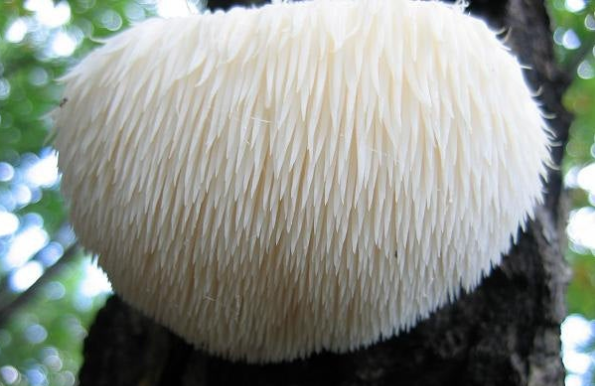 Mushrooms provide a vast array of potential medicinal compounds. Many mushrooms — such as portobello, oyster, reishi and maitake — are well-known for these properties, but the lion’s mane mushroom, in particular, has drawn the attention of researchers for its notable nerve-regenerative properties.

Lion’s mane mushrooms are not your classic looking cap-and-stem variety. These globular-shaped mushrooms sport cascading teeth-like spines rather than the more common gills. From these spines, white spores emerge. Lion’s mane mushrooms also have other common names: sheep’s head, bear’s head and the Japanese yamabushitake. I like the clever name “pom pom blanc” — a reference to their resemblance to the white pom-poms cheerleaders use. The Latin name for lion’s mane is Hericium erinaceus; both names mean “hedgehog.”*

Lion’s mane mushrooms are increasingly sold by gourmet food chains. This nutritious mushroom is roughly 20 percent protein, and one of the few that can taste like lobster or shrimp (Stamets, 2005). Lion’s mane is best when caramelized in olive oil, deglazed with saké wine, and then finished with butter to taste. Lion’s mane can be bitter if not cooked until crispy along the edges. It takes some practice to elicit their full flavor potential.

Lion’s mane mushrooms are increasingly studied for their neuroprotective effects. Two novel classes of Nerve Growth Factors (NGFs) — molecules stimulating the differentiation and re-myelination of neurons — have been discovered in this mushroom so far. These cyathane derivatives are termed “hericenones” and “erinacines.” The levels of these compounds can vary substantially between strains, based on the measurements our team has conducted.

About a dozen studies have been published on the neuroregenerative properties of lion’s mane mushrooms since 1991, when Dr. Kawagishi first identified NGFs in Japanese samples. Since his original discovery, in vitro and in vivo tests have confirmed that hericenones and erinacines stimulate nerve regeneration. In 2009, researchers at the Hokuto Corporation and the Isogo Central and Neurosurgical Hospital published a small clinical study. Giving lion’s mane to 30 Japanese patients with mild cognitive impairment resulted in significant benefits for as long as they consumed the mushrooms

One thought on “Lions Mane Mushroom”