Kenyans producing, selling or even using plastic bags will risk imprisonment of up to four years or fines of $40,000 (£31,000) from Monday, as the world’s toughest law aimed at reducing plastic pollution came into effect.

The east African nation joins more than 40 other countries that have banned, partly banned or taxed single use plastic bags, including China, France, Rwanda, and Italy.

Many bags drift into the ocean, strangling turtles, suffocating seabirds and filling the stomachs of dolphins and whales with waste until they die of starvation.

“If we continue like this, by 2050, we will have more plastic in the ocean than fish,” said Habib El-Habr, an expert on marine litter working with the UN environment programme in Kenya. 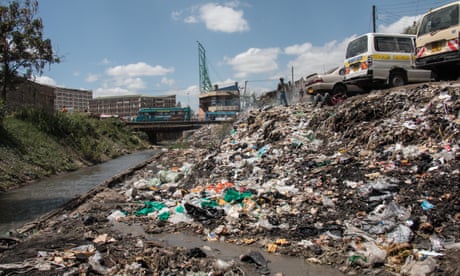 ‘There is so much out there’: Kenya’s plastic bag battle – in pictures

Plastic bags, which El-Habr says take between 500 to 1,000 years to break down, also enter the human food chain through fish and other animals. In Nairobi’s slaughterhouses, some cows destined for human consumption had 20 bags removed from their stomachs.

“This is something we didn’t get 10 years ago but now it’s almost on a daily basis,” said county vet Mbuthi Kinyanjui as he watched men in bloodied white uniforms scoop sodden plastic bags from the stomachs of cow carcasses.

Kenya’s law allows police to go after anyone even carrying a plastic bag. But Judy Wakhungu, Kenya’s environment minister, said enforcement would initially be directed at manufacturers and suppliers.

It took Kenya three attempts over 10 years to finally pass the ban, and not everyone is a fan.

Samuel Matonda, spokesman for the Kenya Association of Manufacturers, said it would cost 60,000 jobs and force 176 manufacturers to close. Kenya is a major exporter of plastic bags to the region.

“The knock-on effects will be very severe,” Matonda said. “It will even affect the women who sell vegetables in the market – how will their customers carry their shopping home?”