In Australia, psychological tools developed with Aboriginal people can also support farmers whose land is suffering the effects of climate change. 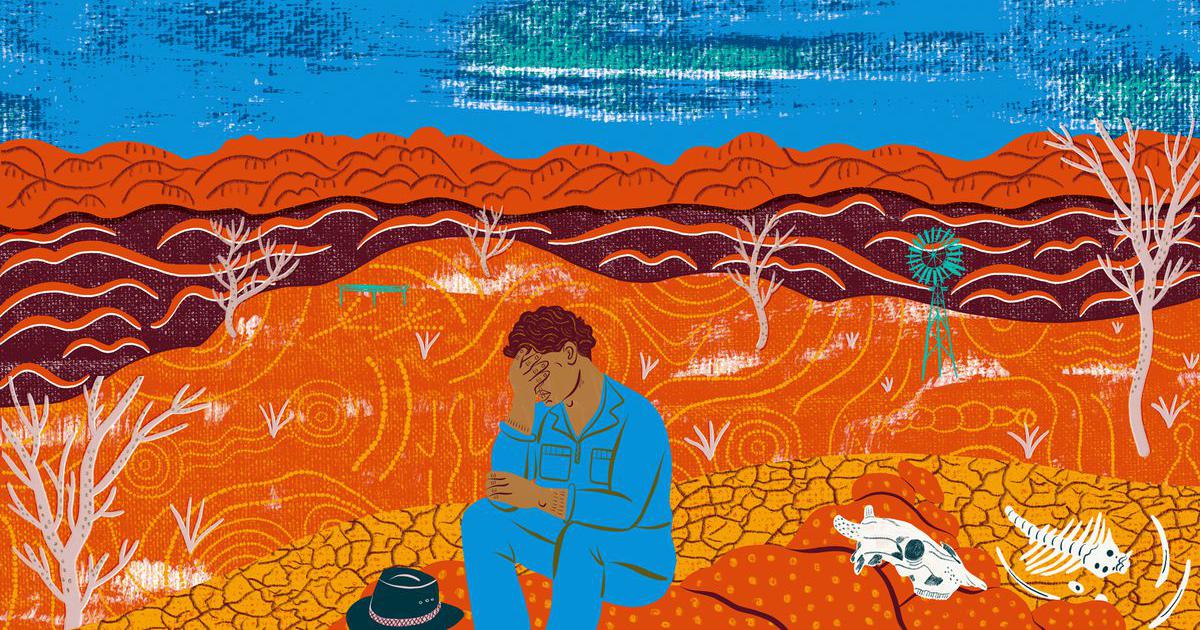 ‘If the land is sick, you are sick’

A coal truck roars past, stirring up red dust that blows over the famished cattle and sheep lying in grassless paddocks. The carcasses of dead kangaroos lie next to empty water troughs. There is no birdsong.

Some say it has been the worst drought in a century here across the central and eastern part of Australia. As in other parts of the world, climate change and land clearing are driving soaring temperatures and extreme weather events, including heatwaves and droughts. Australia already sees several weeks each year when temperatures climb above 45ºC, but few people were prepared for the drying-up of dams and waterways.

Food insecurity is now a real threat in parts of the country as livestock and wildlife are dying in inner New South Wales. Farmers are struggling; rates of depression and anxiety are increasing among those who stay.

“I was sleeping for 15 hours a day,” says Richard, a cattle farmer living near White Cliffs in western NSW. “I felt so sick and tired I thought I had cancer. But it was depression.”

His depression hit just before this drought, and was brought on, he thinks, by extreme stress and family issues. But drought only adds to farmers’ stress: it degrades the land, which makes it harder to earn a living.

In 2018, a study from the University of Newcastle in NSW found that farmers in rural parts of the state experienced “significant stress about the effects of drought on themselves, their families and their communities”. Other research suggests that income insecurity related to drought increases the risk of suicide among farmers.

Psychologist Pat Dudgeon at the University of Western Australia is used to people suffering in response to extreme stress. She was Australia’s first Aboriginal psychologist, and specialised in suicide prevention because of the mental health issues in her community in the Kimberley, a region of north-west Australia.

Throughout Australia, rates of suicide have increased dramatically for Aboriginal and Torres Strait Islander people over the past 30 years. The rise is due to ongoing issues of racism, poverty and intergenerational pain, the legacy of centuries of colonisation and mistreatment by British and Australian governments. For instance, many Aboriginal people have had their land taken from them and been forcibly removed to live in missions or be fostered by non-Aboriginal people.

Dudgeon believes many lessons can be learned about grief and trauma from the loss of land and culture that Aboriginal people have experienced. She says psychology can move away from the Western tradition of expert and patient, towards a more narrative form based on Aboriginal traditions and reconnecting with the land. And as more psychologists begin to incorporate these Aboriginal concepts into their practice, such a combined approach might help farmers dealing with drought to reconnect with the land and improve their mental health, too.

“If the land is sick, you are sick,” says Fiona Livingstone, who manages a suicide prevention programme at the University of Newcastle’s Centre for Rural and Remote Mental Health.

She explains that the traditional Aboriginal concept of health is much broader than that of conventional Western medicine. Aboriginal people, she says, are deeply connected to “country”, the place with which they have spiritual ties. The personal, social and ecological are closely interconnected: “health” is the state in which they are all in balance.

Prolonged drought affects Aboriginal communities in farming regions economically, because it leads to a lack of work. There’s also grief at the loss of nature from the deaths of wild animals and plants. These experiences of not being able to take care of the land during long periods of drought increase stress, leading to an increase in antisocial and risk-taking behaviour such as drug dependence and drinking. People begin to “mistrust each other, gossip maliciously and turn against each other,” say the authors of one report. Droughts can have the effect of “exacerbating underlying grief and trauma”.

Read the full article at Scroll