Today there are just 45,000 African American farmers. One man is fighting to save them

by Summer Sewell in Baskerville, Virginia, and Shreveport, Louisiana

John Boyd Jr’s grandfather Thomas, the son of a slave, slept with the deed to his farm under his mattress. He worried constantly that his land would be taken from him.

Twenty miles away and three generations later, Boyd lives on his own 210-acre farm, in a big white colonial house with rows of soybeans that go almost up to the front door, like other people have grass. One hundred cattle, a cluster of guinea hogs, three goats and a small herding dog named Fatso, whom Boyd calls his best friend, live there.

He feels more secure on his plot of land than Thomas did. But Boyd is an aberration.

The black farmers who have managed to hold on to their farms eke out a living today. They make less than $40,000 annually, compared with over $190,000 by white farmers, which is probably because their average acreage is about one-quarter that of white farmers.

As a fourth-generation farmer, Boyd has witnessed other black farmers do the same thing he’s done: claw at the dirt in an attempt to hold on to it. And Boyd has devoted himself to helping other black farmers, always remembering the words he heard his grandfather Thomas mumble over and over: “The land don’t know color. The land never mistreated me, people do.”

Today he’s come to understand two things: how the long fight he put up is just a drop in a rusted-out bucket, and exactly why there are so few black farmers left.

In Baskerville, Virginia, huge sunrises turn ponds into fiery gulfs. Strangers in cars wave as they pass. Food is fried and smothered. Things move slowly. This is also Trump country, with support displayed on bumper stickers and hand-painted roadside signs. “Dixieland”, as Boyd calls it, has palpable racial tension.

He is a big man with deep-set eyes usually in the shadow of a cowboy hat brim. His voice could rumble floorboards. Boyd, 53, seems most content bouncing in the seat of his tractor, smoke tufts marking his trail. He’ll harvest the soybeans he’s busy planting today in the fall, once they’re about knee-high.

He needs 45 bushels from each acre to make a profit. To avoid being docked – getting priced down for moisture or debris in the bushels – he will ask his wife, Kara Brewer Boyd, to enlist her white stepfather to sell the beans for him. When the other man takes Boyd’s beans, he’s not docked but complimented.

“I lose money if I sell them myself,” he says. “In 2019, that shouldn’t be happening. I shouldn’t be losing money because I’m black.”

Boyd’s had time to get used to this mistreatment. His struggle for equal footing started as soon as he bought his first farm for $51,000 at age 18 in 1984. He went to the Farmers Home Administration, a lending branch of the USDA, about 90 miles from Baskerville to apply for operating loans. Year after year, his applications were denied or delayed.

“Looked at your application and we ain’t gonna be able to help you this year,” he says the loan officer would tell him. Once, Boyd says, a white farmer interrupted their meeting, exchanged quick pleasantries with the loan officer, and walked out, having not even applied, with a check for $157,000. “And I’m begging for $5,000,” Boyd recalls, shaking his head.

In subsequent visits, the loan officer told Boyd he better learn to talk to him like other black folks did, took naps during meetings, threw Boyd’s applications straight into the trash and spat his chewing tobacco on Boyd’s shirt, claiming to have missed his spittoon. 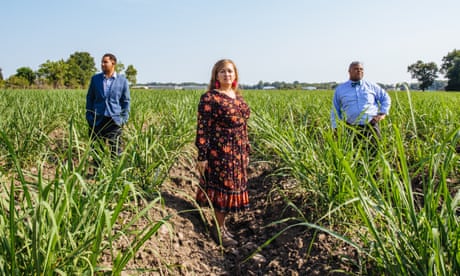 ‘It’s not fair, not right’: how America treats its black farmers

The officer only took meetings with the nine black farmers in the county on Wednesdays. “He would leave the door open and speak loudly and boastfully so that we could hear just how bad he was talking to each one of us,” Boyd says.

The successful investigation on Boyd’s behalf prompted other black farmers to come forward with their stories, and in 1995 Boyd founded the National Black Farmers Association after meeting with many black farmers and hearing similar USDA experiences.

“All these farmers were coming out of the woodwork saying, ‘You think what happened to you is bad? You should hear my story!’” he says. “I was just trying to save my farm. But then I saw this was a huge national issue.”

In 1997, Boyd and 400 other black farmers sued the USDA in the landmark lawsuit Pigford v Glickman, which alleged that from 1981 to 1997, USDA officials ignored complaints brought to them by black farmers and that they were denied loans and other support because of rampant discrimination. In 1999, the government settled the case for $1bn, and more than 16,000 black farmers received $50,000 each.

But Boyd didn’t know his work was just beginning.

After that settlement made news, more black farmers came forward saying they didn’t know about the lawsuit in time to apply for the money. This time, Boyd wasn’t a plaintiff but an advocate on behalf of more than 80,000 late claimants. In 2000, he began making trips to Washington to wait in hallways for politicians whose faces he’d studied in congressional dictionaries, hoping to find a sponsor to push to reopen the case. “That was a lonely battle out there on Capitol Hill. That was a bunch of lonely meetings,” he says.

He drove his old Mercedes the 200 miles to Washington, sometimes two or three times a week. When that approach seemed too subtle, the trip by mule and wagon took 17 days. By sputtering tractor, it took five. Sometimes he slept outside Capitol Hill in the wagon. Sometimes his cousin Ernest kept him company on the trip. Other times, farmers and their wives came with signs bearing slogans like, “Black farmers have waited long enough.”

Meanwhile, he went to funerals of older black farmers who died hoping for compensation. His own crops and relationships suffered, most notably with his children.

“There were a lot of down times where I would go home and [Congress] would have recess and I would see family members. ‘Are you still working on that? Man, you need to give that up. You ain’t never going to win that,’” Boyd recalls them telling him. “There were many times where I said, I don’t know if I want to do this any more.”

Finally, after eight years, Boyd got then-Senator Barack Obama to be the lead sponsor of the measure to reopen the case, and Congress set aside $100m to assess the late claims. In December 2010, as president, Obama signed a bill authorizing $1.25bn in compensation to the late claimants, settling the lawsuit known as Pigford II.

The bill and a photo of Boyd shaking hands with Obama hang framed near the fireplace in his brick-floored living room. The pen Nancy Pelosi used to sign it is around the house somewhere, too. For Boyd, that moment, the ink absorbing into the paper, was the peak, the reward.

Read the full article at TheGuardian