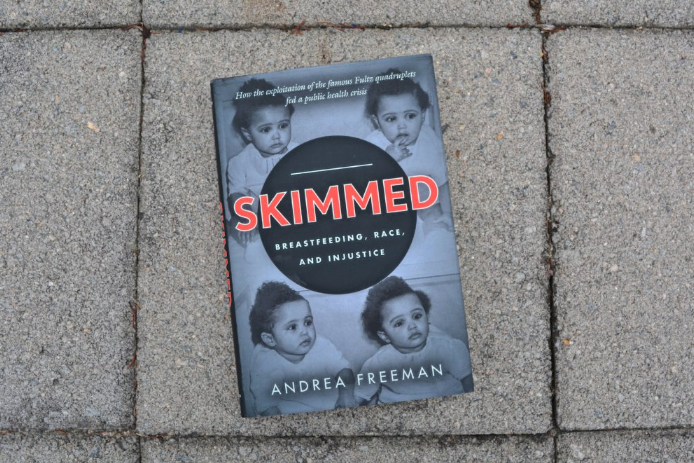 How Black Women Were ‘Skimmed’ By Infant Formula Marketing

Here & Now‘s Tonya Mosley speaks with Andrea Freeman — whose book “Skimmed: Breastfeeding, Race, and Injustice” looks at how formula was marketed to black women in the late 20th century.

A FORMULA FOR DISCRIMINATION

On May 23, 1946, in the rural southern town of Reidsville, North Carolina, a small miracle occurred. The woman responsible for this miracle was Annie Mae Fultz. Annie Mae was a tall, beautiful, Black-Cherokee mother of six children. She had lost her ability to speak and hear during a childhood illness. Beginning at 1:13 a.m., Annie Mae gave birth, in short intervals, to the world’s first recorded identical quadruplets. Against the odds, each of these four tiny girls survived their first few hours and began to grow steadily. Word of their birth spread quickly throughout the country. Annie Mae’s joy at her perfect new daughters was irrepressible, expressed in exuberant debates with friends and relatives at her hospital bedside about possible names for the girls. But this overwhelming happiness was far too short-lived.

Fred Klenner was the White doctor who delivered the girls in Annie Penn Hospital, in the basement wing reserved for Black patients. Dr. Klenner quickly realized how his new patients’ instant celebrity could benefit him. He began testing his controversial theories about vitamin C on the girls on the day of their birth, injecting them with fifty milligrams each. He did not stop there. Dr. Klenner snatched the privilege of naming the girls from Annie Mae and their father, Pete, a tenant farmer on a nearby tobacco farm. Dr. Klenner gave all the sisters the first name Mary; then middle names belonging to his wife, sister, aunt, and great-aunt: Ann, Louise, Alice, and Catherine.

Dr. Klenner was still not done. He began negotiating with formula companies that sought to become the newly famous Fultz Quads’ corporate godparent. The company with the highest bid would be the first to target Black women with a formula advertising campaign. Dr. Klenner selected St. Louis’s Pet Milk company for this honor. The deal he made with Pet Milk set in motion a chain of events that would lead to Annie Mae losing, not just the right to name her girls, but the girls themselves.

The consequences of this contract reached far beyond the Fultz sisters. Pet Milk’s campaign directed at Black women reaped unexpectedly high profits. The company was one of the first to market anything but alcohol, tobacco, or beauty products directly to Black families. Through Pet Milk’s bold marketing scheme, many Black women became convinced that formula was just as healthy as, or even healthier than, breast milk. This comforting belief made it easier for them to succumb to a host of external pressures not to breastfeed.

Half a century after the birth of the Fultz sisters and Pet Milk’s ad campaign, the Bad Black Mother stereotype played a role in the misfortune that befell Tabitha Walrond, a young Black woman from the Bronx, and her son, Tyler. After nineteen-year-old Tabitha became pregnant, she spent weeks struggling to break through the bureaucracy of New York’s Medicaid offices to get a card for her son before his birth. Despite her exhaustive efforts, when Tabitha went into labor, Medicaid still had not corrected the computer error that had caused the delay. The system’s indifference to the needs of a young, poor, pregnant Black woman was typical. In this case, it proved fatal.

Tabitha’s delivery was rife with complications, forcing her to extend her hospital stay by a few weeks and to delay breastfeeding. Eventually, Tabitha’s doctors released her and Tyler from the hospital. When they did, they discharged her with false information. It is common for doctors not to see Black women as individuals and to ignore symptoms that they would pay attention to in White women. Tabitha’s doctors overlooked the fact that her difficult delivery and a previous surgery would affect her milk supply. The hospital staff negligently assured Tabitha that her baby would thrive on a steady diet of her breast milk. They were wrong.

Instead, Tyler lost weight. Tabitha did not notice, because, as a new mother who never left her infant’s side, she could not easily perceive changes in his size. Although friends and family urged her to take him for a postnatal checkup, no doctor would see him without a Medicaid card. Tyler was born on August 27, 1997. He died from inadequate nutrition eight weeks later, in a taxi on the way to the emergency room. White mothers who lost children under similar circumstances received sympathy and inspired legal changes in the length of required hospital stays. In Tabitha’s case, the prosecutor charged her with second-degree manslaughter. Mourning the loss of her son, Tabitha faced the prospect of losing her freedom as well. Throughout her ordeal, the press pounced on the opportunity to demonize Tabitha and blame her for Tyler’s death.