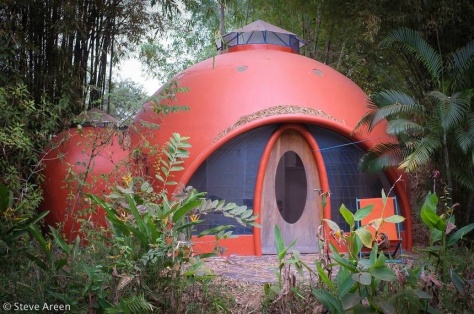 First there was foamcrete, then there was papercrete and hempcrete, and now we’ve got AirCrete, a foamy mixture of air bubbles and cement that is cheap to make, waterproof, fireproof, and DIY-friendly.

At one point, I fell under the spell of domes as a building form, and as I had plans to someday build my own home on some vacant land, I spent quite a bit of time and energy exploring the idea. Geodesic domes sure did look cool, but dang, there are a lot of angles and joints on a geodesic dome house that would not only have to be cut and assembled, but that would also be a potential weak point for water leaks for the entire life of the home, and almost all of the materials would have to come from off-site, so that design was out for me.

A rammed earth home, however, could be built with mostly on-site materials (plus a metric boatload of labor), but that technique would work best with walls that were vertical, not curved. Adobe blocks could be made on-site and built into a dome, and would be an appropriate choice for living comfortably in the southwest, but I wasn’t convinced that adobe was the best choice of materials for forming the roof of a dome, even if plastered and sealed.

I then really fell in love with Nader Khalili’s Fired Ceramic Houses, which lead me down the path to learning about his SuperAdobe creations and then on to earthbag construction in general, which seemed the most accessible style of all. In the end, I ended up buying an old adobe home, so I never got any further into building a dome than doing the research, but I still keep my eye out for interesting and low-cost methods of DIY building, and I recently came across this new (to me) construction material that seems worthy of consideration.

DomeGaia’s AirCrete homes, which are the brainchild of Hajjar Gibran (who happens to be the great-nephew of the poet Kahlil Gibran), are made with a foamy mixture of cement and air bubbles, which create a lightweight and low-cost building block that is fireproof, waterproof, and serves to insulate the building. According to its creator, AirCrete offers a number of desirable attributes for use as a building material for single-storey residences, especially for the owner-builder, among them the ability to cut construction costs “by a factor of 10” when compared with conventional construction.

“It is waterproof, fireproof, and insect proof. It offers good thermal and acoustic insulation. It will not rot, warp, or corrode. Unlike concrete which is hard, heavy, cold and difficult to work with, AirCrete is easy to work with. It dries overnight and can be cut, carved, drilled and shaped with wood-working tools. It accepts nails and screws and is easily repaired. It had good compressive strength to make excellent foundations, subfloors, building blocks, poured walls, domes or whatever. It can be molded or formed into practically any shape.” – DomeGaia

The key to AirCrete is in the foaming agent, which works to suspend tiny air bubbles in the cement mixture, and a small piece of equipment, a continuous foam generator, which disperses a mix of the foaming agent (which can be as simple as an all-natural “high foaming” dish detergent) into the cement mixture to be mixed together. DomeGaia sells a readymade foam generator unit, the Little Dragon, and has plans and parts for building your own, as well as selling a Foam-Injection AirCrete mixer.

DomeGaia also has building plans for sale for AirCrete domes, and offers 10-day building workshops in Mexico and the Philippines, as well as information and answers to FAQs, on its website. I came across a number of other videos about building with aircrete recently, and then found a UK organization called the Aircrete Products Association, but it seems to be referring to a different material (Autoclaved Aerated Concrete) than the DomeGaia version.