Before a marathon or other long race, you make sure your energy stores are as full as possible by carb-loading. But what about your fluid stores? Is it possible to “hydration-load”? If you just drink a bunch of water a few hours before your race, that will stimulate your need to urinate, and you won’t retain any of the extra water (assuming you’re already well-hydrated). But you may be able to circumvent this urge by adding a little salt to your water, which changes the osmolality of your blood and in turn affects levels of the hormones that make you need to pee. There’s a downside, though, as every shipwrecked mariner has discovered: drinking saltwater doesn’t make your stomach feel good.

So is there an ideal balance that allows you to add extra water stores without getting the runs? That’s what a new dose-response study in the European Journal of Applied Physiology, from researchers at the University of Tsukuba in Japan, aimed to find out. They fed eight volunteers about a liter of fluid over an hour, varying the sodium concentrations, while monitoring changes in fluid balance, plasma volume, and digestive comfort. The sodium concentrations were 0 (i.e. water), 60 mmol/L (similar to World Health Organization oral rehydration solutions), 120 mmol/L, and 180 mmol/L (similar to concentrations that have given the highest increase in plasma volume in previous studies.

Here’s what the changes in plasma volume and overall fluid balance looked like:

8 Moves To Target Your Core 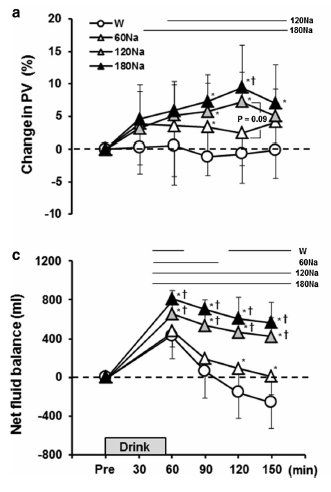 Only the two highest doses of sodium produced statistically significant elevations in plasma volume two hours after the drinking started (though you can see that the lower sodium dose did produce “intermediate” values). Not coincidentally, only the two highest sodium doses produced diarrhea in the subjects — 1 of 8 subjects had it with 120 mmol/L, and 6 of 8 with the highest dose of 180 mmol/L. The conclusion: 120 mmol/L of sodium provides the best balance between boosting plasma volume and not having to visit the portapotty, at least in a protocol that involves drinking 1 liter of water in six equal doses between 120 and 60 minutes before the race.

So does this actually improve performance? In theory, higher plasma volume should help you pump oxgyen to your muscles more efficiently, thus boosting performance. In practice, it’s worth remembering that (a) you’ll be carrying a bit of extra weight, (b) even without diarrhea, a mildly upset stomach could interfere with performance, and mostly importantly (c) individual responses vary. It’s also worth noting that, even at the higher sodium levels, the subjects peed out between a third and half of the water they drank — that could certainly be a hassle in the final minutes before a race, let alone during the race.

This content is created and maintained by a third party, and imported onto this page to help users provide their email addresses. You may be able to find more information about this and similar content at piano.io