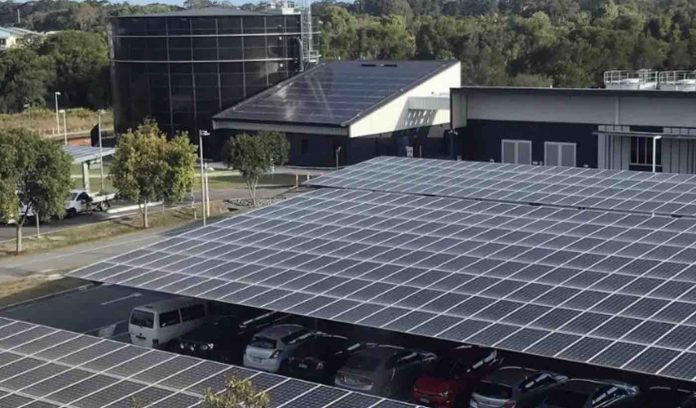 An Australian university has been using a 3-story “water battery” to power their air conditioning—and it has already slashed their overall electrical usage by 40%.

The first-of-its-kind battery, which was switched on at the University of the Sunshine Coast (USC) in September, stores energy generated by 6,000 solar panels that have been installed across campus rooftops.

Over the course of the next 25 years, the thermal energy tank is expected to save $100 million in air conditioning costs and dramatically reduce the school’s greenhouse gas emissions, according to school representatives.

The innovative cooling system was launched in partnership with resource management company Veolia as just one of the ways that the school is working towards their goal of being carbon neutral by 2025.

“USC has a plan to be completely carbon neutral by 2025, which is a challenge to any budget because it requires significant changes to the way energy is captured and consumed,” said USC Chief Operating Officer Dr. Scott Snyder. “So, we really did have to think out of the box, and by forming a partnership with Veolia, we were able to negotiate a 10-year plan that suited us both and delivered major energy savings to the University.”

“The system was switched on in September and is now delivering 2.1 megawatts of power and we estimate that we will save more than $100 million in energy costs over the next 25 years,” he added. “Another benefit is that we are able to take our students to visit the system and teach them about innovation and finding cleaner energy solutions for the future.”

LOOK: Rooftop Panels of Tiny Plants Can Cleanse Polluted Air at 100 Times the Rate of a Single Tree

Last week, the ingenious system was recognized by the prestigious Global District Energy Climate Awards after the school was declared the winner of the “Out of the Box” category for innovative eco-solutions.

“The innovation displayed throughout this project is a testament to both organizations and could only be achieved through an open and collaborative partnership” he said.