I was hoping for a week of realization and change. They’re right when they say be careful what you wish for. I was on my way to a Buddhist Meditation retreat in the English countryside, 250 miles from my home. The retreat was focused around the Metta Bhavana – a meditation to develop sense of universal, indiscriminate compassion. The word Metta is basically interchangeable with the word ‘Love’ but without the romantic connotations.

When I first arrived I felt a little underwhelmed, I guess I had perversely wanted it to be less inviting. I had imagined myself sitting on a cold slab in lotus position with a searing pain in my hips, which I would eventually be able to ignore due to the sheer power of my trained mind. Instead, there were cupboards stocked with biscuits and breads and a selection of all the teas you could think of. Comfort does not equal growth, I thought. In my first session it was so warm and cosy that I fell asleep as soon as the meditation started – and I would have got away with it too, if I hadn’t started snoring.

As the days went on a realized that I had been short-sighted to think that comfortable exterior would mean an easy time. When you are on a retreat a lot of your emotional crutches are unceremoniously removed. Your phone – I couldn’t text friends to share my feelings. Lots of enforced and unenforced silence meant that I could not verbally express kindness to make connections with the other women, so I made friends much more slowly than I ever had before. However, with these gone I felt as though I cared for the people around me more genuinely regardless of whether I spoke to them or not. I noticed their habits, their vulnerability and their pain. We started with shorter meditations and as the days went on they got longer. We started with a body scan or mindfulness of the breath and then we practiced the Metta Bhavana;

1st section: Send Metta to yourself

3rd: Send Metta to someone you have difficulty with

4t:h: Send Metta to someone you feel indifferent to (i.e someone who served you in a store, or you see at the bus stop sometimes)

A ‘loving’ meditation doesn’t sound challenging – it actually sounds light and fluffy. For me this couldn’t be further from the truth. I found it exhausting – I found myself thinking loving thoughts sometimes but I was disturbed by the amount of negative, destructive thoughts that I was having towards the people that were in my meditation. A few women spoke of the warm fuzzy loving feeling that they got in their chest when thinking about other people. I didn’t get it at all and I felt jealous.

I found this hard to accept as I had always thought of myself as a loving person – with too much love to give if anything. So when it was time to leave I felt that I needed more time there and that I had failed. When I got back to the train station to come home, away from the little group of 30 women that I had spent a week with, I freaked. I can only imagine that I looked like a deer in the headlights on that train, standing, gripping the back of a seat while some of the women comforted me. I found a simple train journey a panic-inducing ordeal when one week before I had been squashing myself in to rush hour tube rides in the centre of London without a second thought. When I got home I felt more agoraphobic than ever and couldn’t face seeing my friends – why I didn’t feel more blissed out and loving?

I thought, what did I do wrong? I was calm at the retreat and now I feel worse than when I left. This feeling lingered for weeks afterwards until I began to realize some things about my personality. I realized that I was highly sensitive – I picked up on people’s emotions quickly – this was why I ended up mirroring people and striking up quite philosophical conversations with strangers. The Metta meditation was outward – I was always thinking about other people already and I thought I could have benefitted from a more solitary meditation – i.e mindfulness on the breath, candle meditation or a body scan. I was also still living in London and living the same life. You can go to a meditation course, come home and feel entirely overwhelmed by the lights, traffic, amount of people, but still not want pack up and go live on a farm. We must think about balance. A retreat is a retreat from the normal world, but it is not a retreat from your neuroticism, mental health issues or life. If we use it as such then it is just a brand of escapism; even better than sunning it up in the Bahamas for a fortnight and feeling even worse when we must come home. Some people thrive on retreats – but it is not a magic pill – it can be hard work and can show you some things about yourself that you didn’t want to see.

The retreat was in May and it has genuinely taken me months to see how it helped me. I began to implement, mostly unconsciously, the lessons that I learnt there in to my daily life. I have not sat and practiced the Metta Bhavana since I left but the power of loving intentions has improved my friendships. I now let my friends know that I care about them through communication and intentions – without expecting that they should just know. With the Metta practice turned inward, I have begun to forgive myself for my sadness; when I am feeling fried or exhausted I think of the most loving thing to do for myself – like take a long bath, buy a delicious fruit and make myself a nice meal. When I go in to situations, which could be confrontational, I set the intention that I will go and be as loving as I can. When you set this intention you are lowering your defenses, instead of saying ‘I’m not going to let them do this to me’ you are saying ‘Whatever they do, I will show love’. This is brave, and from doing this I realized why I was finding it so hard to connect to feelings of love while practicing The Matta Bhavana – fear of vulnerability, fear to show love.

Sometimes now I push through the crowds to get on the tube. I snake through anonymous bodies to get a seat and sit. I look up from my book or phone, and see a sea of anonymous faces. Now, sometimes they aren’t anonymous anymore, I see souls and one true heart beat resonating from us all – if only for a moment.
Written by : @Dorotheaantigone

Circadian rhythms describe regular events that happen to all humans, plants and animals on a daily basis. We are far from understanding all of them and their effects on our health but we know that there are processes that happen in all of us on a roughly 24 hour cycle influenced by various cues from our environment. The influence of these rhythms can change sleep and wake cycles, release various hormones, influence body temperature and regulate other important bodily functions. While we all have circadian rhythms there are some differences in the length of the cycles which helps to explain why some of us are “night owls” and others are “morning people”. There also appears to be a genetic component to our rhythms which explains why some lifestyle habits such as staying up late appear to run in families.

The image below shows many of the circadian rhythms:

From the image we can see regular changes in melatonin secretion, body temperature, vascular changes and bowel changes among others. For example, melatonin secretion starts around 9pm and ceases around 7:30am with our period of deepest sleep at 2am. This sets in place a natural sleep cycle for us as humans. For those of us who work late hours or third shift we are in direct contention with this natural cycle and this may lead to issues with sleep or other aspects of our health.

We also see that our lowest body temperature is at 4:30am and our highest is at 7pm. This natural temperature variation allows for many processes in our body to function correctly, yet our temperature controlled environments may not always cater to allowing these functions to completely take place. This, again, is another example of possible disruptions.

Prahlad Jani, also known as “Mataji“, (born Chunriwala Mataji, 13 August 1929) is an Indian sadhu. He claims to have lived without food and water since 1940, and says that the goddess Amba sustains him.

Born Chunriwala Mataji, Jani grew up in Charada village in Mehsana district.[1] According to Jani, he left his home in Rajasthan at the age of seven, and went to live in the jungle.

At the age of 11, Jani underwent a religious experience and became a follower of the Hindu goddess Amba. From that time, he chose to dress as a female devotee of Amba, wearing a red sari-like garment, jewellery and crimson flowers in his shoulder-length hair.  Jani is commonly known as Mataji (“[a manifestation of] The Great Mother”). Jani believes that the goddess provides him a liquid sustenance[2] or water, which drops down through a hole in his palate, allowing him to live without food or water.

Since the 1970s, Jani has lived as a hermit in a cave in the rainforest near the Gujarati temple of Ambaji, awakening at 4am each day and spending most of his time meditating.

One thing I found interesting and was able to make a connection to was when they were speaking of looking at the sun. I have read that the geometrical pattern in leafs is the same pattern which is in our eyes to receive light  -Flower of Life Vol 2. We receive light to communicate images to ourself but have we forgotten the real power to transfer energy from the sun. imagine a time we could live without food or water… interesting.

Citrine energizes every level of life.  It cleanses the chakras and opens the intuition.  Citrine attracts wealth, prosperity and success.  It imparts joy, wonder, delight and enthusiasm.

Ever wonder If Yoga would help the imaginary marriage you will be in one day? Well it will!

Here are 10 ways yoga can help your marriage:

1.Yoga is about connection.
Practicing yoga makes you more connected to yourself. The process of slowing down and connecting to your breath makes you more aware of how you’re feeling and what you’re thinking. When you’re better able to understand yourself, it’s easier to be more understanding of others, which leads to feeling more connected.

4.Yoga helps you process.
The very process of tuning in to your breath allows you to sift through your feelings and gain insight into whatever the issue is. From this more lucid place you can figure out if it’s something you need to discuss with your spouse, or if it’s better for you to process on your own.

5.Yoga is about softening and letting go.
The physical practice is a great teacher; at some point you run into your own stuck places and there’s nowhere to run. Yoga teaches you to back off and go easy when you encounter a tight place in your body. Breathe deep. Soften. Let go. 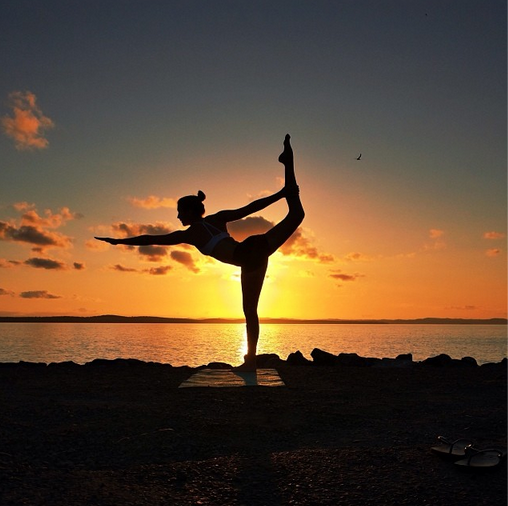