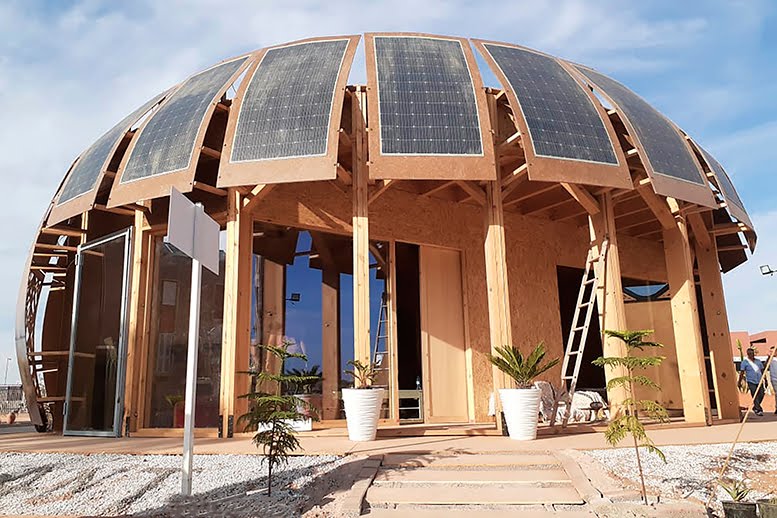 A team of organizations has completed construction of a ground-breaking eco-building in Morocco that combines hemp construction with a high-tech solar energy system for total independence from the electrical grid.

The SUNIMPLANT project, designed as a single-family dwelling, was created as an entrant in the recent “Solar Decathlon” organized by the United States Department of Energy and Morocco’s Centre de recherche en Energie solaire et Energies nouvelles. The biannual international competition challenges teams of students to design and construct solar-powered buildings. The most recent edition was hosted in Ben Guerir, Morocco, the first time the competition has been held on the African continent. 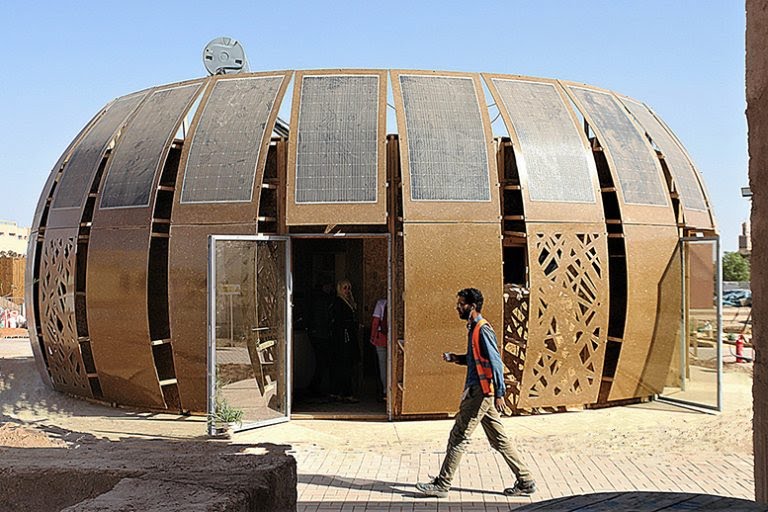 “This ‘space-ship’ is advanced in time and reflects a turn not only in North Africa but in hemp construction, which doesn’t have comparable prototypes anywhere in the world,” said Monika Brümmer, a German architect and natural builder who led the project.

While the building was designed as a stimulus for rural development, the technology also has application in urban settings, Brümmer noted.

Owner at Spain-based Cannabric, Brümmer is also a co-founder of Adrar Nouh (2017), an NGO which promotes the use of indigenous hemp stalk for rural development and sustainable employment in Morocco’s impoverished High Rif. Adrar Nouh was started in 2017 by Brümmer and Abdellatif Adebibe, a Moroccan expert in alternative development in the Rif region.

The challenge was to create a hemp composite using vegetable-based bio-resins, avoiding technical or synthetic components, Brümmer said. The cylindrical envelope of the circular building, with minimal exposure of the 24 exterior panels, gives interior comfort through optimal damping and thermal phase shift, and osmosis of the components in the hempcrete formulation, Brümmer said.

Built for around $120,000, the building’s price tag was less than half the cost of the most expensive buildings in the competition. Additional features of the 90 sq. m. SUNIMPLANT building include:

• A double skin façade that employs a mixture of hemp, earth, pozzolan and lime, all sourced locally; and bio-composites incorporating hemp technical fibers that were produced via vacuum injection technology.

• A spherical, aerodynamic outer skin comprising 24 semi-flexible photovoltaic panels. Sponsored by DAS-Energy, the panels are exposed to all faces for their use of sun and light, with maximum 40% losses.

• Curved bio-composite panels made with hemp wool, which increase the performance of the photovoltaic panels by protecting their back side against the weather extremes of the semi-arid region of Ben Guerir, where temperatures reached 42°–46°C (107°– 114°F) in the shade during the construction phase last August and September. 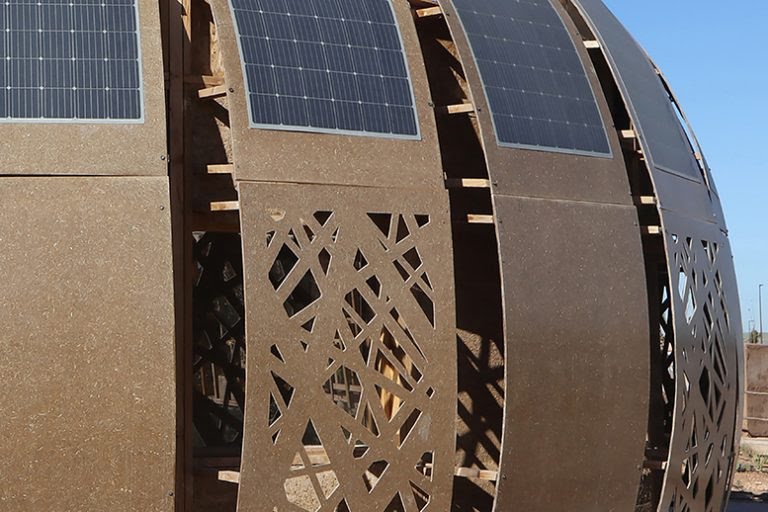 Brümmer said even greater performance could have been achieved if original plans to install hemp-clay boards for the internal partitions and floors, and other minor modifications, had not been abandoned due to funding constraints.

Adrar Nouh contributed the architectural design, developed the hemp materials and cooperated in the construction of the building. Other participants on the SUNIMPLANT project were Morocco’s National School of Architecture and National School of Applied Sciences, both based in Tetouan, Morocco, and Germany’s Fraunhofer Center for Silicon Photovoltaics.

Read the full article at HempToday