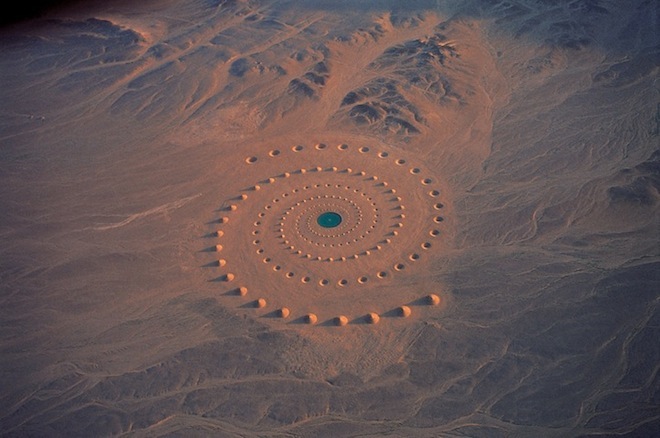 In 1997, she joined with industrial designer Alexandra Stratou and architect Stella Constantinides to create a breathtaking spiral made up of alternating conical dips and protrusions in the Sahara Desert, near the Egyptian town of El Gouna just off the Red Sea. The project, known as Desert Breath, spreads over one million square feet of sand. 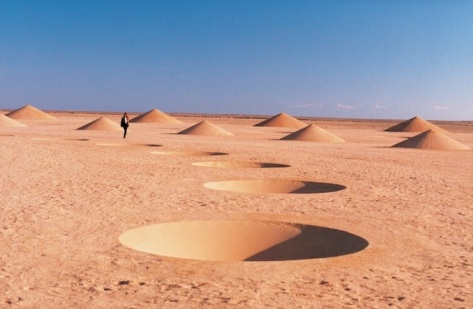 While the installation is still visible from the sky, there are marked signs of weathering. A body of water that once acted as the work’s center point has since evaporated. The earthen mounds have flattened over time, and cracks can be seen on the overall surface of the piece. For the artists (known collectively as D.A.ST. Art team), Desert Breath’s impending demise is the whole point. 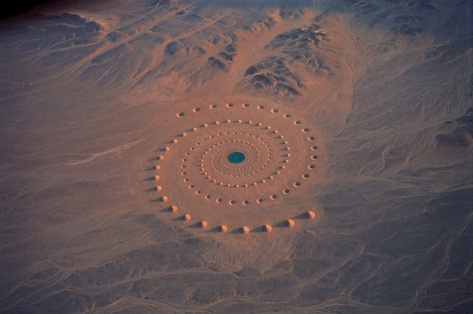 Mycology - The scientific study of fungi. The first time I went looking for mushrooms with my boy Jordan (RIP) was quite magical. Blue Wylies were the type he would forage north Georgia. We pulled up to a spot behind a playground with a small area filled with trees that separated the park from the horse stable. He warned me to be in and out cause this spot was hot but he also brought a spliff to burn while we was there. Jordan had that type of logic. 5 minutes of looking around we saw nothing he told me to spark the spliff , I lit it and 5 seconds later it seemed like mushrooms all of sudden started appearing. We left with 2 grocery bags filled of fresh dark blue Wiley mushrooms. I was 16 at the time and thought we could always find them wild but that wasn’t the case. This forced me to learn how to grow mushrooms myself and I still wish I had a sample of blue wileys to clone. I’ll always appreciate him for putting me on. This is the Liberation Pack from @myco_dogon_west 3 Agar Plates 1 Genetics Plate 1 Spore print 1 Art piece / Giveaway Entry If your interested in growing and studying this is a good place to begin. Plus it’s an affordable hobby/ field of learning. #mycology #cubensis #growmushrooms #mushrooms #psilocybinmushrooms #psilocybe
Quick run, was feeling heavy for the first 5 minutes yet this probably was my quickest casual run. All this bread baking had my knees feeling like dough. Looking for running buddies all summer (I don’t look back though) keep up or catch up. Infocus247.com Side note: I could use some new running shoes #run #nikerunning #nikerunclub #nikedunk
The mystic swims in the water the psychotic drowns in. Be mystical 077 Now loading.. after this run Infocus247.com #yoga #peace #cubensis
Had a moment of clarity. The meaning of one of my favorite songs came to me. Love in outer space, it can never falls. Floating far beyond the darkness. Giving every planet a hug and each star a kiss. I can get lost in ya dark hole but I won’t resist the abyss. Infocus247.com #sunra #outerspace #love
Yogi Selects x LifeisArt If the world were to end tomorrow or unite in peace ..what do you think would be responsible for both? If the world ended tomorrow it would be due to the lack of love and compassion for one another on every scale. If the opposite happen where the world would unite in peace it be due to a global conscious decision to put down all of our " personal " differences and focus on the healing of the world from the inside out. By any means necessary. Read the full article at Infocus247.com x @lifeisart_films #yoga #art #meditation #memories #peace #yogaflow #yogaofcolor #yogisofinstagram #yogiselects #meditate #energy #capoeira #movingartexperience #focus
Yogi Selects w. @tierra.denae Why Is the disconnect-retreat necessary in a technology dominant time and can you tell us more about it? We are addicted to “likes” and opinion sharing. Even myself. The Disconnect came about after going to a yoga retreat and seeing so many people still very connected to everything outside of their current experience with one another. I thought to myself if I ever had a retreat, no one would be able to use electronic devices (outside of the photographer) so that we could truly get back to human connection. Every retreat since that time has been increasingly better and deeper. How can fear be beneficial? Fear is beneficial in that its a guide to what you are capable of. Your dreams are often right on the other side waiting for you to work through it all. Read the full article at infocus247.com Check out the @thedisconnectretreat also! Next retreat coming up in April! Making plans to attend! #yogiselects #yogaflow #yogisofinstagram #meditation #astral #dreams #yogiart #memories #yogaart #passion #ocean #fearless #travel
Yogi Selects w. @_jamilama How has yoga been a benefit to your diet and vice versa? Yoga is the union of mind, body and spirit. Once you’re awaken in one aspect of your life, everything else aligns with that. Yoga helped me gain the awareness that what I eat ultimately affects my karma, as well as my emotions and vibration. I was a strict vegan for two years. I was trying so hard to stick to the label of “vegan” that it was having a detrimental impact on my body. One day, I fainted face first on the pavement. It’s funny because at that time I thought I was so “woke,” but I wasn’t paying any attention to all processed vegan junk food I was eating. And all the restrictions were making me miserable. Read the full article at infocus247.com #yoga #yogaflow #yogainterview #sistersofyoga #peace #meditation
Passion will obscure our senses so that we eat sad stuff and call it nectar @goddessgloup x infocus247.com #peace
You already know Infocus247.com #theplug
Peace of mind and sunshine is the medicine Infocus247.com #peace
Write up, soon come. Original flex Infocus247.com 👾 @rashedaearl #thismuchiknow #peace
Lovely Locs Swing and Grow Infocus247.com #movement #future #timetravel #locs
Who do we really know? Is it surface deep? Are we quicker to enter and be entered physically than to allow that same entrance to be walked through mentally in the form of questions. Answers that can reveal truths of yourself that don’t want to be seen quite yet. Read the full article at infocus247.com + imgs #depth #life #lessons #learn #lovelanguage #lovelanguages
%d bloggers like this: