AN EXAMINATION OF THE FUNCTIONS, PATHWAYS AND EXCITATION OF THE GLUTAMATE NEUROTRANSMITTER 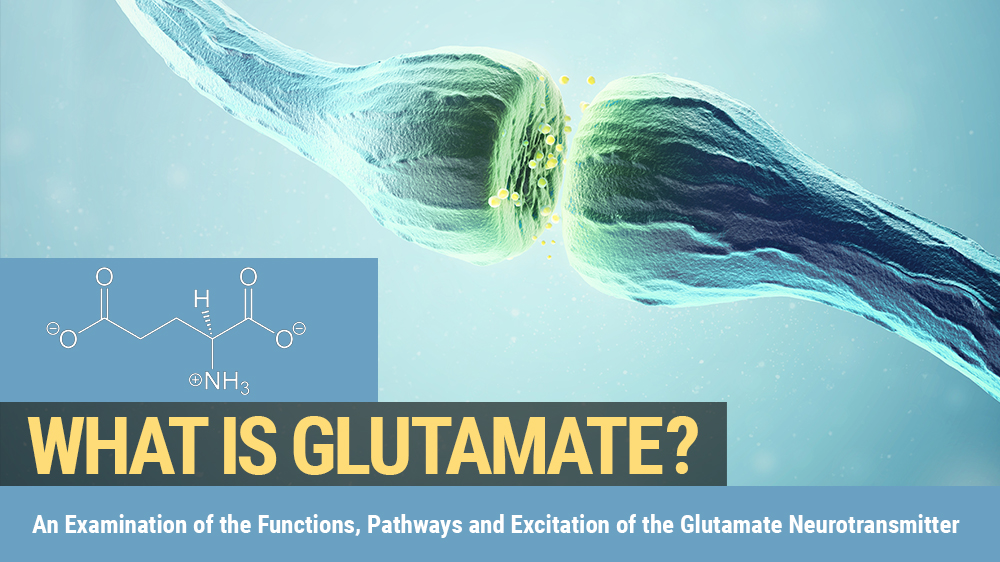 Glutamate is the most abundant neurotransmitter in our brain and central nervous system (CNS). It is involved in virtually every major excitatory brain function. While excitatory has a very specific meaning in neuroscience, in general terms, an excitatory neurotransmitter increases the likelihood that the neuron it acts upon will have an action potential (also called a nerve impulse).1 When an action potential occurs the nerve is said to fire, with fire, in this case, being somewhat akin to the completion of an electric circuit that occurs when a light switch is turned on. The result of neurons firing is that a message can be spread throughout the neural circuit. It is estimated that well over half of all synapses in the brain release glutamate, making it the dominant neurotransmitter used for neural circuit communication.

WHAT DOES GLUTAMATE DO?

In the brain, groups of neurons (nerve cells) form neural circuits to carry out specific small-scale functions (e.g., formation and retrieval of memory). These neural circuits interconnect with each other to form large-scale brain networks, which carry out more complex functions (e.g., hearing, vision, movement). In order to get the individual nerve cells to work together across these networks some type of communication between them is needed and one way it is accomplished is by chemical messenger molecules called neurotransmitters. Glutamate plays a prominent role in neural circuits involved with synaptic plasticity—the ability for strengthening or weakening of signaling between neurons over time to shape learning and memory. It’s a major player in the subset of plasticity called long-term potentiation (LTP).

Because of these and other roles, the glutamatergic system is paramount for fast signaling and information processing in neuronal networks. Glutamate signaling is critical in brain regions, including the cortex and hippocampus, which are fundamental for cognitive function. Glutamate receptors are widely expressed throughout the CNS, not only in neurons, but also in glial cells.

[Note: Glial cells (or neuroglia or simply glia) are non-neuronal brain cells that provide support and protection for neurons.]

Because it is the main molecule promoting neuronal excitation, glutamate is the principal mediator of cognition, emotions, sensory information, and motor coordination, and is linked to the activity of most other neurotransmitter systems.2 But glutamate is not a “more is better” molecule. Glutamatergic communication requires the right concentrations of glutamate be released in the right places for only small amounts of time. Less than this results in poor communication. More than this can be neurotoxic and can damage neurons and neural networks.

THE GLUTAMATE NEUROTRANSMITTER AND THE GOLDILOCKS PRINCIPLE

Glutamate signaling is an example of what’s sometimes referred to as the “Goldilocks Principle.” In the fairy tale story, Goldilocks tastes three different bowls of porridge. The first is too cold; the second is too hot, and the third is just the right temperature. This concept of a “just the right amount” has widespread application, including in cognitive science.

In cognitive science, this principle can refer to a process where the same neurotransmitter (or medication) can have both antagonist (inhibitory) and agonist (excitatory) properties. It can also apply to situations where too little or too much stimulation by the same signaling molecule is linked to sub-optimal performance, but some middle ground amount produces healthy responses.

When thinking about things that follow the Goldilocks Principle it’s important to avoid black-white or good-bad thinking. The key thing to focus on is that there’s a just right amount, often a range, where the best results are produced.

“Glutamate follows the Goldilocks Principle. Too little glutamate excitation can result in difficulty concentrating or mental exhaustion. But too much can result in excitotoxicity, which can damage nerve cells (neurons).”

Neurotransmitters have several characteristics in common. The first is that they are synthesized (i.e., made or created) in neurons. After that, they are moved into areas near the end of neurons (synaptic vesicles near the terminal end of nerve cells) where they are stored until needed. This occurs in preparation for signaling, which involves release of the neurotransmitter from the message-sending neuron into the space between neurons (synaptic cleft), so it can activate (i.e., bind to) receptors on message-receiving neurons. After this signal is sent, the space between neurons is cleaned up, so it can be made ready for the next time a message needs to be sent. This is achieved by absorbing the neurotransmitter into a cell so it can be reused (recycling), and/or by degrading (breaking down and inactivating) the neurotransmitter in the space outside cells. Let’s explore how these occur with glutamate.

Glutamate does not cross the blood-brain barrier and must be synthesized in neurons from building block molecules (i.e.,  precursors) that can get into the brain. In the brain, glutamine is the fundamental building block for glutamate. The most prevalent biosynthetic pathway synthesizes glutamate from glutamine using an enzyme called glutaminase.2

[Note: Enzymes are catalysts used to produce specific biochemical reactions: They usually have names that end in “ase.” Coenzymes are parts of certain enzymes. Many coenzymes are derived from vitamins.]

Glutamine is the most abundant of the twenty amino acids the body uses to build proteins. It can be produced in the body (so is categorized as non-essential). Most glutamine is made and stored in muscle. Under certain circumstances, such as severe stress, the body can require more than it can make. This has led many scientists to consider glutamine as being a conditionally essential amino acid. It is one of the few amino acids that can directly cross the blood–brain barrier, so the glutamine pool in muscle can be used to support the brain.

“The blood-brain barrier acts a bit like a doorman, choosing what goes in (like nutrients) and out (such as metabolic waste products) of the brain. It also protects the brain against the entry of potentially harmful things (like bacteria).”

Glutamate can also be produced from glucose through a metabolic pathway that begins with the conversion of glucose to pyruvate (a process called glycolysis). Pyruvate then ethers the tricarboxylic acid (TCA) cycle (also called the Krebs cycle or citric acid cycle). The TCA cycle forms multiple important intermediates. One of these intermediates is α-ketoglutarate (α-KG). α-KG can be used to produce glutamate. An enzyme called glutamate dehydrogenase, which uses vitamin B3 (NAD+) as a coenzyme, is responsible for this reaction. This same enzyme can reconvert glutamate back into α-KG. Because of this enzyme, glutamate and α-KG can be continuously converted into each other.2 This dynamic equilibrium is a key intersection between anabolic and catabolic pathways and allows the body to shift resources in whichever direction is required.

Neurotransmitters, including glutamate, convey information from one neuron (message sender) to other “target” neurons (message recipients) within neural circuits. After synthesis, glutamate is transported into synaptic vesicles by vesicular glutamate transporters. This transport (and storage) occurs in the message-sending neuron in anticipation of needing to send glutamate messages in the future. Glutamate is stored in these vesicles until a nerve impulse triggers the release of glutamate into the synaptic cleft (i.e.,the space between neurons) and starts a receptor-mediated signaling process.3

The next phase of neurotransmission is cleanup. Signaling is based on relative changes, not absolute amounts. In a quiet room the human ear might detect a whisper. In a loud nightclub it might not hear a shout. Neurotransmitters work on a similar principle. Short bursts of glutamate produce responses. But, for the best response to occur with the smallest amount of glutamate, the space between neurons needs to be the equivalent of a quiet room. Glutamate also follows the Goldilocks principle—too little and signaling within neural networks is subpar, but too much can be neurotoxic. For these reasons, the glutamate in the extracellular space between neurons needs to be continuously removed.

Neurotransmitter cleanup is commonly a combination of (1) transporting some of the neurotransmitter back into cells, and (2) inactivating the neurotransmitter that’s left floating in the space between cells. While the first of these processes applies to glutamate, there is no enzymatic inactivation system for glutamate in the extracellular space. This means that glutamate can interact with its receptors continuously until it diffuses away or is taken up by cellular transporters for reuse/recycling.

“Because there are no enzyme systems in the spaces between nerve cells to inactivate glutamate, it’s important to support nerve cells against excessive glutamate excitation. Astrocytes provide part of this support.”

Some glutamate can be taken up into neurons. This is done by excitatory amino acid transporters (i.e., glutamate transporters), but much of the released glutamate is taken up by a type of glial cell called astroglia or astrocytes. Astroglia surround synapses and play important roles in areas including nervous system repair, metabolic support of neurons, and neurotransmitter cleanup. The combination of neurons and supporting astroglia are responsible for emptying the synaptic cleft of glutamate to turn off the signal and reset the system for generation and propagation of the next glutamate signal. In this cleanup role, astroglia act to protect neurons from glutamate excitotoxicity.